At last, someone with the testicular fortitude

Finally, a politician with the guts and the watak keperwiraan – the testicular fortitude – to address head-on and stand his ground on the issue of vernacular schools, the throbbing cancerous tumour that has been the single biggest obstacle to Malaysia’s social cohesion and the main impediment to the creation of a Bangsa Malaysia speaking in one voice, Bahasa Malaysia, guided by the budaya and tatatertib of the Orang Melayu.

This vernacular school menace must be expeditiously and decisively obliterated from our Tanah Air Tercinta. A society that allows, indeed sanctions, such a prickly, divisive ethno-sociological anomaly – after over a half century of Merdeka – does not deserve the privilege of nationhood. If we think we are a people worthy of our own Negara Merdeka under the Panji-Panji Raja-Raja Melayu Berdaulat, we must then take swift and decisive action to annihilate this societal outrage that has become a clear threat to our socio-political stability, to the development of a cohesive Bangsa Malaysia and, indeed, to our national security and integrity of Bumi Malaysia.

The Malaysian nation cannot support a system that produces functional illiterates molded in the linguistic and cultural forms of alien nations far from the shores of our Tanah Air. Many of these SRJK lost souls drop out upon entering the national high school system due to their sheer inability to adapt to the mainstream Bahasa Malaysia-centric curriculum. Many will become lifelong socio-economic burdens as these social outcasts ultimately percolate into the underground economy to eke out a wretched existence on the fringes of criminality. They also add to the social roadblock towards effective nation-building and in the formation of a cohesive, productive Anak Bangsa Malaysia.

The SRJK(C) and (T) produce kids who are more insular, more parochial and less receptive to socio-cultural diversity. From my own direct interaction with these products of vernacular schooling, I find them not only below par in Bahasa Malaysia BUT also grossly deficient in English as well. Hence, they are handicapped in the national language and the international language of commerce – a double whammy the vast majority will never be able to overcome.

These functional illiterates end up as a cheap source of semi-indentured labour in the motor workshops, auto accessory shops, in the building trades, sleazy unisex salons, become cetak rompak aficionados, stalk shopping malls to harass shoppers with a myriad of worthless gizmos and, in the case of many if not most Tamil-educated Indians, become low wage general workers, lorry drivers and assorted hired hands for the towkays.

The anti-Malay chauvinist politicians will then turn around and blame the NEP and Ketuanan Melayu for this socio-economic malady of their own concoction, further unraveling the last vestiges of social cohesion we may have in our Tanah Air Tercinta.

I often wonder, where is this vast trove of “superior” products of the Chinese and Tamil schools? Where are these people who purportedly benefit from superior education compared to the government schools? 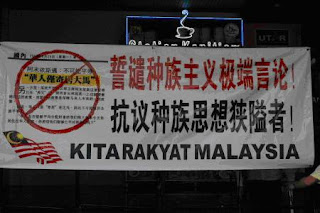 After 51 years of Merdeka?
A banner protesting Ahmad Ismail’s “Cina Pendatang” remark written in …… Mandarin …… the national language of the People’s Republic of China, an alien foreign language (even to ethnic-Chinese Malaysians) that led Ahmad Ismail to view them as “Pendatangs” in the first place.

The inherently contradictory and indefensibly dichotomous position of the Chinese chauvinists in their defense of vernacular schooling 51 years after Merdeka are endless. There exist no single logical argument that supports the continuation of the archaic colonial-era Chinese and Tamil school streams in a sovereign nation such as Malaysia, where Bahasa Malaysia is the sole national language and constitutionally supreme over any other language or dialect. Indeed, no other language is mentioned by name in the Malaysian Federal Constitution.

Anything that threatens the constitutional supremacy of Bahasa Malaysia – and vernacular schools are the most blatant example – must be vigorously curtailed and abolished. The greater public good – in this case, a single unifying language for the Federation – by definition must prevail over ancillary cultural rights of assorted sub-groups and descendants of the immigrant races, collectively defined as “other communities” in Article 153 of the Federal Constitution.

Article 153 of the Federal Constitution in the same breath mentions the "legitimate interests" of the "other communities."

Vernacular schools are clearly impediments to the development and propagation of our National Language among our citizens. Hence, their very constitutionality can be reviewed and debated in the context of propagating the larger national interest and social integrity of the Federation of Malaysia.

In a nutshell, the qualifying term “legitimate” in the "legitimate interests" of the "other communities" implies the non-absolute nature of the “interests” of Malaysia’s “other communities.” In terms of language and cultural "rights" of the non-Malays and non-Borneo natives of the Federation, the determination of what is "legitimate" in the "legitimate interests" of these "other communities" must be conducted against the backdrop of a larger, all pervasive national interest and public good for the Federation. The Federal Constitution hence clearly implies that the "right" of the non-Malay, non-Borneo native populace is non-absolute and subordinated to the rights of the general populace and to the public good. "Mother tongue" language usage and vernacular schooling are no exceptions.

Hence, for contemporary opportunistic anti-Malay politicians to cast the “Malay” and other “Natives” in the same light as the so-called “other communities” and then to demand kesamarataan among these two groups – including a parallel National vs. Vernacular school system – are not only unconstitutional, but also seditious, delusional, mischievous and self-destructive and, indeed, a pathetic indication of their utter ignorance of the socio-demographic blueprint of the Malaysian Federal Constitution that was forged in the context of Malay compromises and giveaways to the desperate, stateless pendatangs and their descendants.

At a time where "Malay Rights" and every single instrument of Malaysian nationhood are being brought into disrepute by the anti-Malay reactionary forces currently infesting and contaminating our Tanah Air, it is time for all patriotic Anak-Anak Bangsa Malaysia to rise and question the many social anomalies and maladies propagated by these same treasonous reactionary forces that have effectively short-circuited our nation building process. Vernacular schooling is the most prominent of these social ailments.

Lets discuss. I want to hear intelligent arguments. State your case logically and share your thoughts and experiences.