"I hope the police can give extra protection to my family members ..." 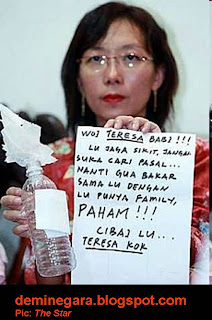 Nothing much to add here except a sense of irony.

The Polis Di-Raja Malaysia that Ms. Kok had spewed so much hatred and venom, the force that she do not trust and whose professionalism she has brought into disrepute – indeed, the purveyor of the “two boiled eggs and some kuah” haute cuisine in the glitzy Lock-Up Café – had to be called in to do the usual penyiasatan and pemantauan.

What about perlindungan? Yes, that too. Teresa Kok told Malaysiakini: “I hope the police can give extra protection to my family members and also to all political leaders. If this can happen to me, it can also happen to anyone.” Hmm, I thought that was Anwar’s line?

Isn’t that a fast “turnover” in Ms. Kok’s attitude and confidence in the Polis Di-Raja Malaysia? Ms. Kok, you want "protection" from your despised ex-jailors now? Then Hamid Albar was correct after all in his definition of "police protection."

See how much the World can change in one week.

Police custody was not so bad after all, uhh? At least the “two boiled eggs and some kuah” fare could be enjoyed with peace of mind. I heard Molotov Cocktails are bad for health. Something to do with anxiety, no?

We Malaysians hope Ms. Kok would refrain from further instigations. Cukup lah. There are enough nuts out there to spoil your day. Baiting them to do stupid things is downright foolish. Now, finish your dog food and move on. Malaysians want to view a new episode of the political sinetron, this time with fresh-faced buxom starlets. Your bit part’s done. It’s a wrap.