Losers' Luncheon and a 3-in-1 Malaysia

Met up with Robin at a kopitiam yesterday. Will post that most interesting conversation soon.

Chitchatted with the guy who couldn't help wanting to be the PM and the guy who needed help when he was the PM.

Just got this from the paparazzi:- 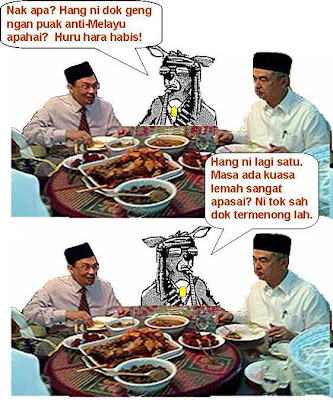 Nothing much happened at that makan, except that the guy to my right (yeah, in tie) devoured everything in sight and the guy on my left lost his appetite.
The MSM later "spun the scoop" into orbit with the report below. Hey Joceline, what's with the "roasted wild deer"? 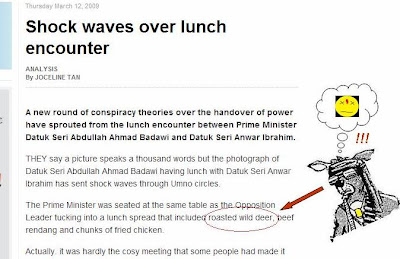 Oh, another thing. Our new Prime Minister is touting something called 1 Malaysia. But how come his blog is multilingual? Even got version in the national language of the People's Republic of China. Dalam Bahasa rasmi Tamil Nadu bila lagi? 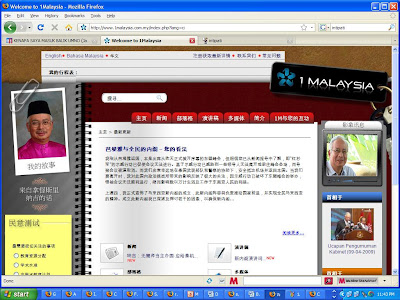 I didn't know we have voters up in Beijing and Dalian and Lanzhou?

Memanda Perdana Menteri, are you promoting 1 Malaysia or a 3-in-1 Malaysia?

In these early days, PM Najib Razak seems to project himself as a neo-liberal almost in the plasticky, superficial Zaid Ibrahim mold in his bid to appease and caress the sentiment of the non-Malays. To me this is an ill-advised stance and, if it persists, would lead to further degeneration of our social order. The undercurrents of discontent to this state of affairs among the Malay majority would be to the detriment of UMNO and the BN and ultimately the nation itself.

As it is, the non-Malays have berpaling tadah en masse to Pakatan. They have tasted the intoxicating nectar of power and it is beyond Najib or anyone else to turn them over to the BN in the foreseeable future. Whatever goodies and giveaways thrown at these people now would just be wasted trump cards earning nothing in return. And these concessions are politically almost impossible to retract or take back once they are dished out.
My advise to Najib and his team is to lay off these wayward non-Malays for now. Ignore and forget these hopelessly seduced bigots and chauvinists and let them tango and cha cha and joget to their hearts content with the Pakatan gang until the honeymoon ends in a self-destructing calamity of scandals, failed expectations and infighting that would mushroom as PRU13 inches closer.
Najib should instead focus his energy on rebuilding the Malay support base for UMNO, and work towards some semblance of "Malay Unity" with PAS within 24 months as PAS drifts away on the choppy waves from the unwieldy, erratic Pakatan ship.Whether it cares to admit or not, UMNO's future as the political ruler of this land has become inexorably tied to PAS' political machinations and leadership intrigue. If the pragmatic nationalists prevail over the orthodox dogmatists in PAS' own internal powerplay, the party will "see the light" and distance itself from Pakatan. And this would profoundly impact Malaysia's political dynamics.

What does it take to induce this seismic shift in Malay politics?
This is the kind of poser PM Najib and his inner circle must contemplate and strategise, the focal point of his quest to forge a solid political base that would facilitate the pursuance of his agenda for national renewal. Hence, the PM should not waste precious time indulging in Mandarin blogs and embracing untenable concepts touting perpetual social variegation that would further propel this nation into a ruinous existence. Najib need not fall over backwards to portray an ill-conceived and unrealistic pseudo-liberalist persona to a group already seduced and poisoned by the Pakatan charlatans.

I'm also boggled by PM Najib's embrace of vernacular schools. This was first demonstrated when he was DPM during the KT By-elections with his RM50 million gift to the SJKCs. I also sense in him a lax attitude towards language. Yes, we all noticed that his 1 Malaysia blog comes in three languages including Mandarin. Many patriots sent me notes on this, and a gentleman even wrote a strongly worded e-mail to Najib (copied to me) complete with a link to my Racial Polarisation post. Couldn't Najib see the ravages on our social cohesion caused by this cancerous SJK anomaly? Is he that ill-informed, out of touch, blissfully ignorant? Another Sleepyhead in the making? Indeed, is he really well read? Or has he become too dependent on ill-conceived briefing papers and abridged analyses percolating from some obscure basement labyrinth in Putrajaya?

My concern here is the quality of advise Najib is getting. At the moment, albeit still very early days, and as mentioned, he seemed more concerned with garnering non-Malay support than anything else. What do you think is currently going through the minds of Malay Nationalists, the bedrock of UMNO's support across the land?
Yes, Najib's 1 Malaysia concept is still in its infancy and will need further calibration, but thus far I don't see any clear blueprint or roadmap for the forging of a real Anak Bangsa Malaysia as I have exhaustively expounded.
What is the socio-political basis of 1 Malaysia? Yes, beyond the catchy jingoism? Indeed, way before we shout catchy slogans and nifty buzzwords that mean nothing beyond the superficial glitter and noisy razzmatazz, we must first forge a solid ideological foundation, an irrepressible philosophy that makes 1 Malaysia a natural, long-overdue social blueprint that would be embraced by the Rakyat as a matter of rational imperative. And this foundation of nation-building must be able to withstand the test of logical inquisition and critical analysis and prevail and flourish as something so profound, so necessary, so timely in this phase of our nation's existence.
To do this, Najib and his team must revisit the primordial building blocks of our nationhood. They themselves must understand history and will need to communicate to the Rakyat how and why we became what we are today and what needs to be done to recalibrate the trajectory of our social evolution. Explain the flawed prescriptions of the first 51 years of nationhood, including the utter neglect and confusion of the past six years, that collectively created an untenable multilingual, multicultural, multi-identity and multi-everything milieu forged on a brittle palate of overlapping realities pulled apart by the incompatible aspirations and divergent expectations of a mutually-estranged populace. Then expound why we have no choice but to recalibrate our societal dynamics to a new paradigm of shared affinities underpinned by a common, pervasive national language, Bahasa Malaysia, and a socio-cultural mold based on the budaya and tatasusila of the original Orang Melayu essence of this nation.

This is the immediate challenge for the PM and his team.


And my message to the subversive historio-revisionists: ponder and contemplate with much-needed humility the statements below by the pioneering leaders of the minority communities. This one-third of the Malaysian Rakyat has today deviated from their aspired place in our society and has been the main obstacle to nation-building, due in part to their complete and utter ignorance of Malaysian history.

The minorities must be infused with a sense of responsibility (which comes with the Kerakyatan package) to help forge a civil, progressive society, a common, irrepressible Bangsa Malaysia yang memartabatkan Satu Bahasa Satu Negara dan berlandaskan Satu Bangsa Satu Negara.

… in 1955 we won the elections with a great majority. Then we obtained freedom in two years time. During this period, we had to discuss citizenship and various other things. Now what did the Malays do -- since we are speaking on racial lines -- what did the Malay leadership do? They had 88 percent of the electorate still with them. What did they do with citizenship? If we look around in Asia and East Asia, particularly, you will find that my race the Indian race, is not welcomed in Ceylon, is not welcomed in Burma.

Look at my brother Chinese race, it is not welcomed in Thailand, in Vietnam, in Cambodia, in all the other areas. What help do they get for citizenship in all these territories? In Burma, as we know, Indians have been send packing, in Ceylon they refused them citizenship and in Burma it is likewise. I know it, you know it. And yet in Malaya what happened? Here we found that the Malay leadership said, "We shall take them unto ourselves as brothers, we shall give them full opportunity to live in this country, we shall give them every opportunity to become citizens." And so, in 1957, for the whole year, we waived language qualifications, and tens of thousand of Indians, Chinese, Ceylonese and others became citizens ...

As I said, it has been my great good fortune to have been born in this country. Where else can you find a more charitable, a more polite, a more decent race than the Malay race? Where else can you get such politically decent treatment for any immigrant race? Where else in the history of the world? I ask you. These are the facts. Who are you to safeguard us? I am a 10 percent minority race here. But I am happy here.

The Malays, through UMNO, were generous enough to relax the citizenship laws of this country to such extent that within 12 months of independence, 90 percent of the non-Malays became citizens. This was different to the situation before Merdeka whereas 90 percent of the non-Malays were still non-citizens after nearly 100 years of colonial rule in the Malay States. In return for this major concession. the MCA and the MIC agreed to continue the policy of preserving the special position of the Malays while at the same time upholding the legitimate interest of other communities.

So there you have it. In no uncertain terms. In the public record. Unequivocal. Edged for posterity.

Read and reread carefully the profound statements by V.T. Sambanthan and Tan Siew Sin. Need I say anymore? Still want to deny facts? Still want to rewrite history? Still think you owe the Melayu Tuan Tanahs nothing? You exist as Warganegaras with all kinds of Hak and Keistimewaan on this Bumi Tanah Melayu out of your own volition, the sheer briliance of your species, as a natural right bestowed by some higher being?

Reread the two statements. Instill a sense of Keinsafan and Sikap Berterimakasih to the Orang Melayu for your incredible good fortune to be able to live here and partake in your cultural excesses to your heart’s content with little fear or restrictions and even to the detriment of the Melayu Tuan Tanahs themselves. A little Sedar Diri and appreciation of your Asal Usul and Tempat Dalam Masyarakat would go a long way towards the rehabilitation of your groupthink, to cleanse your souls of the inherent mala fide and degenerative inclinations, and provide a glimmer of hope, albeit excruciatingly faint, of your embrace of the tenets of the true Bangsa Malaysia concept that I have expounded many times.

Again, go read the two statements and learn it by hard and repeat them to yourselves whenever you are inflicted by your peculiar primal urge to cause social mayhem and bedlam in my Tanah Air Tercinta.