Much has been said about the ISA detention of Raja Petra Kamarudin. Over the past decade, the 58 year old has emerged from obscurity to become a sort of cult figure for some Malaysians, and his detention has become a cause célèbre for “the quest for justice and inequality.” RPK is also perceived by many to be some sort of figurehead and rallying point in their opposition to the UMNO-led Barisan Nasional coalition that has governed the country since Merdeka 51 years ago.

Who are these RPK supporters?

Do they truly represent the Malaysian social milieu? Well, they themselves certainly feel that way. A browse through RPK's Malaysia Today portal would give that impression. The lively postings allude to a sense of inevitability in the socio-political evolution of this country, where some sort of People's Power movement, indeed an alternative irresistible political force, would sweep through Putrajaya to obliterate and replace the current ruling oligarchs with an "enlightened" administration driven by the mantra of Ketuanan Rakyat.
.
Is this really an accurate sketch in the complex Malaysian socio-political canvas? Do these people -- the posters, lurkers, trolls and bots inhabiting the Malaysia Today cyber-habitat -- really represent the conscience and aspirations and, indeed, the essence of the Malaysian people, a compelling sampling of the changing socio-dynamics permeating our nation?
.
Not really.
.
Who are these people then?
.
Malaysia Today is a typical SoPo portal, an aggregator of third party newsfeeds and blog postings, spiced with some original articles by RPK himself prior to his ISA detention. The Malaysia Today Webmaster (RPK in the past, and now his close associates since his detention) would "moderate" incoming readers' comments to ensure congruence to the portal's political sentiment. RPK himself said that daily he had to delete 500-600 comments sent by Malays, which he termed the "UMNO Cyber Troopers." This effectively skewed Malaysia Today into a supra cyber platform for non-Malays to spew their bigotry and chauvinism while sheltered from Malay reactions.
.
Typical of other SoPo blogs and portals, the site is frequented by the usual suspects, namely political gossip junkies in need of their daily "fix" of sensational revelations and maladies of the ongoing Malaysian political telenovela. The human tendency to revel in a schadenfreude orgy was satiated by RPK's rich pipeline of sensational "scoops" as well as his series of "True Stories" of our historical past, including a revisionist portrayal of the May 13 Incident, a version much more palatable to his predominantly non-Malay audience.
.
Visitors to his portal may not necessarily share RPK's ideology or the anti-Malay, anti BN/UMNO flavour of the content. Many just want to read alternative viewpoints to supplement the less-than-credible spin spewed by the mainstream media. Some visitors may, indeed, be RPK's many enemies, wanting to check out his latest antics. Yet others are just curious.
.
Out of this pool, a smallish group ultimately immersed themselves into the Malaysia Today cyber-habitat, became hyperactive posters, and evolved into "MT junkies," glued to the site for hours on end, alienating themselves from the realities of Main Street Malaysia and oblivious to the constantly shifting socio-political undercurrents that define Malaysian politics. These MT junkies -- overwhelmingly non-Malay -- actually believed their own postings, facilitated by the total lack of competing Malay viewpoints as these were "moderated away" by Malaysia Today's Webmasters. The MT junkies reinforce this make-believe empowerment by incessantly regurgitating the same points of view, essentially preaching-to-the-converted, in their comments to every new Malaysia Today story.
.
The propensity of Malaysia Today to block comments from Malays (RPK's "UMNO Cyber Troopers") that would countervail the bigoted viewpoints of the Chinese chauvinists and Hindraf sympathizers contributed to this false sense of empowerment among the non-Malays.
.

The unbridled spiral of prejudice and contempt -- in a make-believe cocoon devoid of the voice of the Malay majority -- fueled an irrational exuberance among the MT junkies over a perceived "inevitable" change in the Malaysian political landscape, where the non-Malays (in the guise of DAP's Malaysian Malaysia stance shrouded by the Ketuanan Rakyat mantra of the Pakatan Rakyat coalition) would have the major grip on political power in this country while the UMNO-led Barisan Nasional coalition would collapse and dissipate into thin air.


This RPK chap, a likable personality with a free-spirited, bohemian streak, was gradually emboldened by the ceaseless cheerleadings and promptings of the MT junkies. Ever more sensational stories were churned but these could not satiate the hungry hordes. RPK then did the ultimate – he himself became the story, starring in his own improbable sinetron radiating from the keyboard of his PC.

With RPK in the starring role, who needs third party revelations? He is the story! He can craft his own play and act in his own drama. He has reached the nirvana of SoPo blogging. Quite predictably, hits on Malaysia Today hit the roof, giving chedet.com a run for its money. RPK was now on par with Dr. Mahathir Mohamad! Nobody gets larger than that in Malaysia. Pak Lah, Najib Razak and even Anwar Ibrahim were reduced to supporting cast and bit players in the eyes of the MT junkies. A sense of invulnerability descended upon the Malaysia Today cyber-habitat and the mystique of RPK’s infallibility permeated his congregation.

But again, who are this flock of adherents that contributed to the deification of RPK in the cyber universe?

Here’s a quick and dirty classification:-

Groupie Gang I: The Idealists
These are the believers of a new, utopian Malaysia devoid of racial, religious and class conflict; a land of plenty for all; a just, corrupt-free nation of civil, law abiding citizens united in a celebration of cosmopolitan multiculturalism. The thought leaders of this small but influential group include fellow bloggers Dr. Azly Rahman, Malik Imtiaz Sarwar, Dr. Bakri Musa, Harris Ibrahim, as well as writers Karim Raslan, Wan Hamidi Hamid and politicians, Zaid Ibrahim and Tunku Aziz Ibrahim. The Idealists, albeit for different reasons and motivations, advocate either the abolishment or a revamp of the NEP, demonise Ketuanan Melayu, and view BN/UMNO as an obsolete post-Colonial relic quivering through the final vestiges of its existence. The elegant intellectual discourse spewed by the Idealists, usually revolving around the need for social justice, meritocracy and more “progressive” Malay attitudes are well received by the predominantly non-Malay MT junkies as this would entail the dismantling of perceived Malay-centric policy legacies built over the years by BN/UMNO. The non-Malay MT junkies usually refer to this group in their comment postings as the “good Malays.” Articles and blog postings by these "good Malays" are prominently displayed in Malaysia Today and their Chinese and Indian-friendly comments are approved by the gatekeeper, giving the casual Malaysia Today reader the false impression of a softening Malay stance amidst the perceived newfound political clout of the non-Malays in this "new" post-318 Tsunami political landscape.

Groupie Gang II: The Anwaristas
This collection of visitors and posters view Malaysia Today as a convenient platform to spew their venom against anything that had to do with BN/UMNO, more so the likes of Pak Lah, Najib Razak and Hamid Albar. The nucleus of the Anwaristas’ gene pool can be traced back to Anwar’s ABIM and Reformasi days. Many are ex-hardcore UMNO cadres purged from the party in the aftermath of Anwar Ibrahim’s battle royale with Dr. M. These are essentially closet UMNO people – in attitude and mindset – the “have nots” in the intra-Malay competition for patronage and privileges. Beyond a common enemy in a Pak Lah/Najib-led UMNO, they have no affinities to Groupie Gangs I, IV and V and do not partake in commenting except to glorify Anwar Ibrahim and to ridicule the key UMNO personalities.

Groupie Gang III: The PAS Malays
These are predominantly PAS members, with some PKR supporters among the lot. They view UMNO as their ideological foes and tolerate the other RPK Groupies (for now) in their bigger quest to win the Hearts and Minds of the Malay masses. This group makes up a small minority in the English-centric Malaysia Today Cyber Habitat and many have filtered away amidst the strident criticisms on Islam by the portal and the comments sent by the anti-Malay MT junkies.

Groupie Gang IV: The Rabid Anti-Malay Racists
These are the bread-and-butter of Malaysia Today and form the majority of the posters. Their posts and comments say it all. Everything in Malaysia is linked back to their hatred of the Malays. These are the ethnic-Chinese chauvinists, Hindraf sympathizers and assorted hangers-on who suffer from an overwhelming sense of alienation in this country. They equate every symbol and instrument of Malaysian statehood – from Bahasa Malaysia to the Negaraku to the Rukunegara to the Songkok to the Jalur Gemilang and, of course, the Keris – to the Malays and hence not worthy of their respect and deference. This attitude spawned a deep-seated hollowness permeating their souls as they languish in a land whose essence run contrary to their aspirations. Hence, every post emanating from this Group would revolve around their revulsion of and paranoiac vengeance towards the Malays. Of course, when like-minded posts coalesced in the Malaysia Today cyber-habitat, an explosion of Malayphobia saturates the portal. And with the Malay voice effectively moderated-away by the Webmaster, this racist mania continues unchecked and unchallenged. The venom and ferocity of the attacks are matched only by the “spin” applied to various issues by authors and articles allied to their non-Malay agenda. Of course, to appease the Anwaristas and the PAS and PKR Malays, these Rabid Racists would replace “Malay” with the term UMNOputra or Mat Rempit or just plain beruks, but the message to the casual reader is clear: They hate Malays, and all the maladies of this country can be traced back to the Malays. Their own kind – the “repressed, smart hard working people” – are portrayed as a Superlative group, held in check only by the smothering political grasp of the Malays (oops, no … by the “UMNO people”) crawling in their subsidised tongkats and crutches.

Groupie Gang V: The RPK Cultists
To this group -- mostly young, impressionable non-Malays with their first intoxicating taste of politics – RPK is a demigod, a messiah sent by the Gods to rid Malaysia of the bad guys, to single-handedly rescue Malaysia from all the maladies caused by these people. Yes, all these and then some in one fell swoop of his …. errrr ….. keyboard! The cultists elevate RPK to a Supreme Being-like persona, a larger than life sage whose every word is the gospel truth, who’s every action is holy, and whose every pronouncement must be followed. Utterances of “my RPK,” “our RPK,” “I love RPK,” “RPK our hero,” “RPK wants” and “RPK says” began to percolate in readers’ postings and comments on Malaysia Today. I get blurry images of Jim Jones, Idi Amin and Kim Il Sung as I forage through the thick undergrowth of readers’ homage to RPK in Malaysia Today. And you know what? I think RPK actually gradually believed in this burgeoning personality cult and began to suffer lapses of self-grandiosity as manifested in his later posts and articles. 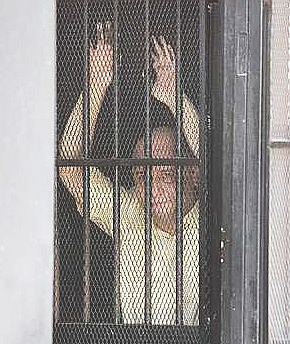 So what happened when RPK got banished to Kamunting? What happened to his hordes of supporters, the people who would join him arm-in-arm in a fight to the death with the ruling oligarchs? Where are the untold millions that would march to Kamunting to tear down the walls and hand-pluck RPK from the grasp of the baddies? Where? A hundred people in Anti-ISA and Free RPK t-shirts assembling at the entrance of the Kamunting camp or a couple of hundred people holding a candlelight vigil at Dataran Merdeka just don’t cut it. 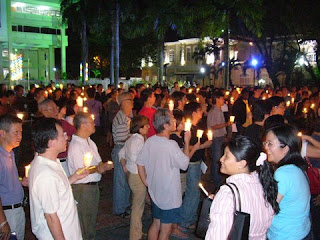 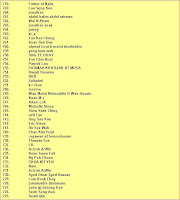 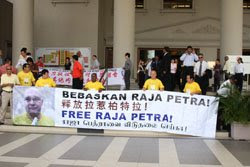 a handful of professionals -- all with chips on their shoulders. 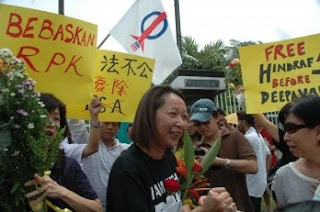 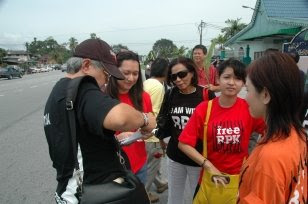